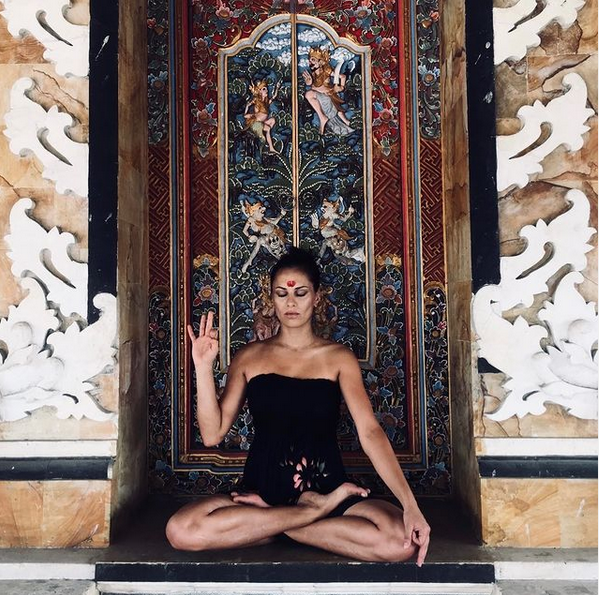 We live in a sensory world of transitory nature. Things existing in the physical reality are never permanent, and we get to experience them as pairs of opposites like cold and heat, pain and pleasure, soft and harsh, self and other, etc. Perhaps the major obstacle for the human race has been to cling to material objects and transitory situations with the illusion that they will last forever. However, with the passing of time, we come to the realization that those things we were holding onto so tightly, were not ours to keep.

What is the vision of formlessness? It is when, instead of an imagined material form, you experience its essential element. It is that which has not assumed a material form as yet, nevertheless it exists. Yantras are symbols of the formless transcendental reality. Archetypes which are trans-sensorial and transcendental. They are the maps of consciousness, mantras, geometric forms that can be visualised by in deep state meditations when trying to experience and understand the subtle vibrations within the own body and the cosmos. At this level of consciousness the impressions or symbols are trans-sensorial perceptions.

How can you imagine that which is nothing?
How will you contemplate that which you have never seen?
What is the formless representation of water? H2 and O; two parts hydrogen and one part oxygen. When the two unite, they become water whose form you can see. In this case the formula is the formless representation. In the same way, a yantra is a symbolic representation of the eternal principle. Yantras can also appear in dreams when the mind has bypassed the senses and gross physical awareness.

Yantra means an instrument, a medium by which one can access the deeper layers of consciousness. Yantras are geometrical patterns, geometrical symbols which represent the movement of energy within consciousness. Several different geometric figures are used in the creation of yantras.

Sanskrit: „to sustain“, „support“, instrument, contrivance, apparatus“
is a pure geometrical Figure aligned to the center point made of several concentric figures and conceptualized as multi-dimensional architecture. A Yantra structures space through maximal abstraction in order to mediate principles of greatest universality.

It is a spiritual technology for realizing Meditation (concentration) and considered auspicious standing for the path of detached action. It may be appropriately envisioned as prototypical concept mapping machine or conceptual loom. All primal shapes of a Yantra are psychological symbols corresponding to inner states of human consciousness. Yantra’s are symbols of the process of involution and evolution. It enables the adept to retrace his steps from the outward-directed world of multiplicity to the inward focus of unity.

Yantras are geometric configurations, mainly constructed of triangles and circles within a framework of squares. The basic geometric figure in the yantra is the line. From the yogic and tantric perspective, a line is the only way of expressing the unknown. It is the symbol of space. From the line emerge triangles. There are two kind of triangle in yantras: inverted and upright. The inverted triangle represents energy and the upright triangle represents consciousness. In the inverted triangle, the horizontal line above represents space, the left line moving downward represents time and the right line moving downward represents object. Space, time and object: that which is recognised by the individual and lived in by the individual. Space on top, time moving down and sense object awareness moving down.

It can be experienced as a 2D and a 3D object. All primal shapes of a Yantra are psychological symbols corresponding to inner states of human consciousness. Traditionally such symbols are used to balance the mind or focus it on spiritual concepts which as shown is possible whatever material is used. The act of creating and/or concentrating on a Yantra is held to have spiritual benefits.

The choice of material used, snow, wood and other natural materials, shows not only the temporiness of existence but also the inevitable fleeting of time as the material transforms back into nature, which after all are both its own esthetic essence.

The 'intention' of my artwork is irrelevant, since i do not have control whatsoever over how my artwork is 'used'. I do not own the meaning of my work, thus it is what it is.

"...it isn’t about becoming anything. It’s about un-becoming everything that isn’t really you, so you can be who you were meant to be in the first place."